I was intrigued recently as I scrolled through my Facebook news-feed. Christians were calling for a boycott of the new Beauty and the Beast film, featuring Disney’s first openly gay character. When I investigated further, it was more than a mere individual boycott. Entire theatres, such as this one in Alabama, were refusing to show the film at all. Of course, I believe everyone has the right to decide what they want to watch or not watch, but I couldn’t help but wonder: why this movie?

Alternately, perhaps the outrage is not just that a movie contains a gay character, but that a Disney movie has a gay character. Disney is supposed to support wholesome family values. They’re supposed to make movies that are ‘safe’ for our children to watch. Really? If you take a critical look at the movies Disney has produced over time, you’ll see among the cute kids and fluffy animals: witchcraft, violence, war, sexual abuse (or, at the very least, unwelcome sexual advances), theft, and manipulation. Again, it does not seem that Disney is behaving inconsistently. They are creating films that people will relate to, because it makes money. I’m going to let you in on a little secret: society is not Christian and it is not society’s responsibility to create media or other paraphernalia that corresponds with Christian values.

The point is not to cocoon ourselves in a blanket of do’s and don’ts in an attempt to shut out the advancing bogeyman representing our worst fears about society going to hell in a hand-basket. Watching a movie with a gay character isn’t going to corrupt us. A more realistic approach is to realize that there are myriad of influences pushing and pulling us each day, not just one film. We need to engage and think critically about all that we are consuming.

In my mind, the inconsistency in logic of reactions to the film point to the deeper issue of a fear-based and judgmental response towards those who identify as homosexuals (never mind those who identify as transgender, queer, or something else). Christians seem to feel threatened by what they do not understand, and by what seems to challenge their deeply held value system.

The reactions also reflect the fear Christians in the West seem to have over loss of influence. They are no longer at the center of society and decision-making. Their power is marginalized and sidelined. As some have said, we live in a post-Christian world.

Fear leads us into action, yes, but it is subjective, illogical, tight-fisted, and often hurtful. Boycotts confirm what many outside the church already think of us: we are narrow-minded, irrational, prejudiced and arrogant. Boycotts make us look like the real beast. This repels people and goes against what most of us want more deeply than we feel fear: for people to know Jesus for themselves.

Instead of responding with boycotts, why not take a fresh look at how the early church operated? They, too, were a minority group in a society that did not share their values. Instead of lashing out, they sought God in prayer and relied on the power of the Holy Spirit. They proclaimed the good news of Jesus’ death and resurrection in word and action, were persecuted, and saw incredible growth. Maybe today that means we go see the film. Maybe it means we bake cookies for our gay friends who experience harassment and discrimination because of who they believe themselves to be. We hear their stories. We love them. Because love isn’t predicated on agreement with someone’s lifestyle or choices. After all, God loved and loves us like that. Let’s stop acting like the beast, and show the world the true beauty of the gospel.

I recently went through the process of church shopping, and discovered it is not all it is cracked up to be. I have no idea why people would pursue it almost as a leisure option. It pretty much sucks, especially for an introvert.

Disregarding my introverted preferences, I drove myself to church after church. After countless handshakes and some admittedly awkward small talk, I sat alone in the pew. I was lost. Metaphorically and, not surprisingly, i

The songs, words, and customs displayed themselves like a play I’d never seen in a language I’d never heard. There was no explanation, just an unspoken assumption that I really should’ve known what was happening. And I should mention that I am a church veteran. I started going to church before I was even out of the womb. Yet here I was, silently crying out for a church culture guide. Someone to help me navigate these foreign practices. Then I wondered, if I were struggling, how would it be for a new churchgoer? Would they be greeted with a handshake, only to be verbally and customarily excluded?

If the answer to that question is yes, and by my own experience, I would say that too often it probably is, then I can’t help but draw the conclusion that our handshakes are deceptive. We’re pretending to welcome people when we really don’t want them there.

At this point, many ask the question, do we even need to be accessible? And if we do, what does being accessible look like? Can’t we live out our Christian culture and just be different? How much accommodation is needed? How far do we have to go? These questions can be complicated, but I believe we can go a long way with the typical Sunday school answer: Jesus.

Yes, Jesus. John 1:14 from the Message version says, “The Word became flesh and blood, and moved into the neighbourhood.” The Word, aka Jesus, became a human being, completely inconveniencing himself to come in a way that we would understand. Philippians 2, also from the Message, adds that Jesus “set aside all the privileges of deity and took on the status of a slave, became human…he didn’t claim special privileges.” If that’s how important accessibility was to God, how can we even question that we need to prioritize it too?

I used to attend a church that repeatedly emphasized, “we want to be a church that non-churched people want to come to.” They showed this by explaining typical Christian words and customs, providing programs to explain the Christian faith, finding connecting points in popular culture, and removing barriers to people finding Jesus. It isn’t easy, and I think it has been a continual process for them to figure out what being accessible looks like, but they’re trying, and that’s what counts.

It is becoming more and more the case that we can no longer assume that the average person understands the Christian story and all that goes along with it. Some people call this ‘post-Christendom.’ The way I see it, we have two options. We either fight and attempt a white-knuckle grip on ‘the way it used to be,’ or we proactively find ways to make our life and message accessible. I’m not talking about compromising on core aspects of truth, but figuring out what needs to happen for it to be understood. Let’s not offer a handshake only to alienate with a foreign word. Let’s lay down our privileges, like Jesus did, and move into the neighbourhood. Are you with me?

Yes, this really is what you think it is. I make no attempt to cover it up. This is a rant on Christian bookstores. Without further ado, let me take this proverbial weight off my chest.

Now, why would all these things be in a Christian bookstore? My guess is it probably comes down to this: the store needs to make money, and people buy this stuff. So, money making with a Christian label.

But why do people, usually Christians, buy this stuff? Maybe we feel better about ourselves reading ‘Christian’ fiction rather than other types of fiction. Maybe we feel like a good witness or encouragement if we can give someone a gift with Jesus plastered all over it. I don’t know.

Honestly, I see this in the bigger context in the Western church between emotion and reason. Looking back over church history, we tend to operate on a pendulum swing between feeling, passion, or experience, and theory, intellect, or logic. Neither extreme is healthy, but we can’t seem to find a balance.

I have a dream of a new kind of Christian bookstore. One that facilitates loving God with our minds through both quality resources and space to engage in study alone and with others. It looks a little something like this… 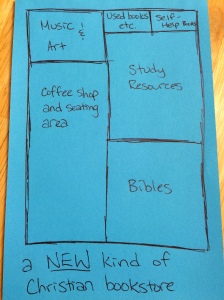 First, the Bibles are moved to the front of the store and given a bigger section. You can rest assured there are no princess or warrior Bibles here.

The Study Resources are also enlarged and brought forward. Here there are proper volumes representing a variety of perspectives to encourage critical thought.

There’s still a Self-Help section, but smaller and at the back. Beside it is a spot for Used Books at a reduced price to increase affordability, recycling, and enjoyment of books.

At the front is also a large Coffee Shop and Seating Area. Why have this in a bookstore? It can be a place to encourage deep connections and discussions, and personal study, as well as hosting visiting speakers or lecturers on relevant topics. And let’s face it, a hot cuppa can do wonders alongside a book!

At the back is a smaller section for Music and Art, no cheese allowed. It would be a place where people could display their photography, paintings, etc. that show how they experience God creatively.

I dream that one day this rant will seem like a distant memory in light of this kind of Christian bookstore becoming the rule, not the rare exception.